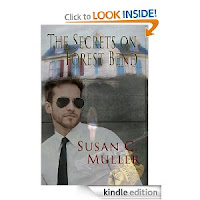 Another day. . . another dead body.

When Detective Adam Campbell learns that a WWII gun is connected to several murders he’s investigating, he hopes that tracking down the killer will be as easy as tracing the gun’s history. When he meets Jillian Whitmeyer, the last known owner of the weapon, the case becomes anything but simple.

Just because you can’t see it, doesn’t mean it isn’t real.

Adam soon learns that people who get close to Jillian have a bad habit of turning up dead. Jillian claims that the spirit of her sister, accidentally killed with that same gun, is responsible for the deaths. She warns Adam that he is likely to become the next victim. Adam’s been a lousy judge of women in the past, and this one’s obviously a nut case. Or is she? How does a just-the-facts detective deal with a ghostly serial killer and the sexy-as-hell sister she won’t set free?

Get your copy here!