The Downhill Slope - It's a Great Thing!

Crossing the 70,000 word line on the work in progress really makes me want to celebrate! :) 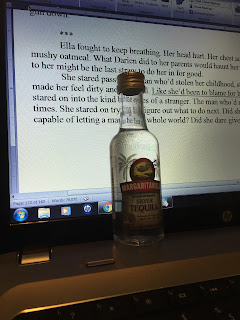 I can almost see the light at the end of the tunnel. Still have quite a ways to go to finish and tie up all the lose ends, but at least I can breathe again. My goal of finishing by the end of this month is looking more promising by the minute. The muse, as well as my characters, is playing nice, which is a rarity.

A scene that took me be surprise this week and had me questioning my heroine's state of mind has really become a turning point in the story. Thought I'd share a snippet. Now it's first draft quality so be warned. LOL


***
Ella fought to keep breathing. Her head hurt. Her chest ached. And her brain felt like mushy oatmeal. What Darien did to her parents would haunt her for life. What he’d almost done to her might be the last straw to do her in for good.
She stared passed the man who’d stolen her childhood, stripped her of her dignity and made her feel dirty and immoral. Like she’d been to blame for her uncle’s lustful ambitions. She stared on into the kind blue eyes of a stranger. The man who’d rescued her not once, but three times. She stared on trying to figure out what to do next. Did she dare trust him? Was she capable of letting a man be her whole world? Did she dare give him that much power over her?
Hand trembling, her finger so damn close to the trigger if she drew in a deep breath the gun would go off, she fought for clarity. Fought for the answer that would set her free. Heaven help her she wanted this to be over. All of it. And she now held all the cards. She looked down at the gun and then back at the man in front of her. If she pulled the trigger, the last of her problems would disappear. Without an army of minions, her uncle couldn’t come after her. He wouldn’t be able to track her. To find her. To hurt her ever again.
“Ella?” Seth’s face crinkled in that cute way she found so appealing and her heart flip flopped before lodging between her ribs.
She choked back a whimper. Who was she kidding? She loved this man. Every single inch of him. Heart and soul she was lost to him and him alone.
So weak and disoriented from her near drowning experience, her tortured body needed relief. She too collapsed to her knees, dropping the gun to the ground.
Seth was there in an instant, kneeling down in front of her. His strong arms embraced her smaller frame, holding her upright and for the first time in so many long, lonely, unrelenting years she felt at home. He was her family now. He was the one who could heal her brokenness.
“You had me scared shitless there for a minute.” He stroked the hair away from her face, lifting her chin with his forefinger.
“I’m so sorry.”
“After what you’ve been through, little lady, I don’t blame you one damn bit.” He plopped down beside her and pulled her into his lap, his kisses feathering the hair on top of her head. “You saved my life.”
“How about that.” She tried to laugh and coughed instead, reminding her how close she’d come to death herself.
“I thought I’d lost you,” he said, his voice tight, raw. Increasing his grip around her waist to keep her from turning around to look at him, he pulled her closer, his breathing unsteady. She snuggled in closer, the racing beat of his heart tattooing all kinds of promises deep into her soul.
And then she dared speak the words that would change her life forever.
“I love you, Seth.”


Love these surprises along the way. Although this one had me more than a little worried. I mean, how can you have a "happy ever after" in a romance if the heroine ends up shooting the hero. ACK!! Maybe it had something to do with it being Friday the 13th?