I'm over visiting the ladies of Killer Fiction today.  Click on over and give me some pointers on how you conquer your fears. :)

Trust me, I need all the help I can get! LOL

Have a Beautiful Weekend!!
Posted by Melissa at 6:57 AM

Found this to be very interesting and had to share.

Selling to Traditional Publishing May Not Give YOU the Safety and Security Your Looking for in Your Writing Career.

Check it out.  I'd love to hear more thoughts on this. :)

Dean Wesley Smith
http://www.deanwesleysmith.com/?p=3665
Posted by Melissa at 4:31 AM

Marketing Tips from a Teenager

Ahh....Spring is in the air.  I can feel it, smell it, almost reach out and grab it.  I for one am so glad to see the cold leave until next fall I could do a happy dance.  Hope my neighbors aren't watching. :)  There are many reasons I decided to remain in Texas, but the warmer climate tops this list.  Cold is fun to visit, but I could never live there.

If you have animals, I'm sure you've noticed that the changes in weather triggers weird behavior in your pets.  For some reason the coming of this new season also triggers something in teenage girls as well.  With two, I've learned this the hard way. LOL  This thing is called "The Need for Clothes".  What they wore last year at this time certainly isn't an option and the fall wardrobe won't cut it either.  Don't even make the mistake of suggesting this one.  If your lucky, they'll quit rolling their eyes by the time they are ready to start making their Christmas list.

Anyway, so off we go to the local mall to see if we can reign in this need that causes moodiness if left untreated for very long.  Here's where the brilliance sets in.  At least I think it's smart now.  At the time, I was mortified.

The Sony store sits smack dab in the middle of the mall and is a favorite hot spot for my two.  Just looking and playing around on the different computers and other technical gadgets makes their day.  They don't even have to buy a single thing.  We used to call this window shopping in my day.  I'm somewhat technically challenged so I don't see the fun in all of it.  Once they'd had their fill, they came back giggling and acting like the darn cat that swallowed a huge canary.  I was pooped out and resting on a near by bench.  Of course I just tell them I'm people watching, you know doing research for my next book.  That's when my middle daughter explains her new marketing strategy for selling my new release.  I knew I was in trouble before she even started.

Apparently, she'd made her way around the store and decided it would be cool to plug in my website on every computer in there.  She left it open to the spot where you can easily find and purchase my book.

Chills rushed my body.  I was cold then hot.  I couldn't move at first and then I wanted to run.  My picture is on that page too.  OMGOSH!  I dug out my sunglasses, ducked my head and couldn't get out of the mall fast enough.  These two stinkers are still laughing about it! LOL

Now that it's over and I've had time to think about it and the initial shock that someone might recognize me in the mall from the picture on the webpage has worn off, I see the brilliance in her thinking.  How many people go through there?  What if they saw it? Even if it managed to catch one persons eye, it was worth it.  And best of all it was free.  Surely, no law was broken by doing this, right?  Oh, that would be my luck. LOL I just told her if she ever does this again, to make sure I'm not with her!

Teenagers!  You got to Love'em!!

Everybody Needs A Little Romance

Stop in and say hello!  One lucky commenter will win award winning author Sandra Edwards' "Broken Wings/Vegas, Baby 2pk!  I highly recommend both stories.  What better way than to get them both at once! :) 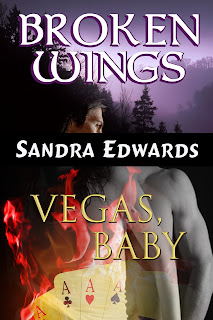 So Why Human Trafficking?

With the release of my new book "Faithful Deceptions", I've had several people ask me why I chose to focus on human trafficking.

Well, it all started with a miniseries on Lifetime back in 2005 called "Human Trafficking, staring Mira Sorvino and Donald Sutherland. If you haven't seen it, I recommend it.  It's a mind boggling story.  I was in the middle of finishing another manuscript, but after watching this movie my muse jumped up and said, "Out of my way, sister!"

I sat down to write a brief outline of the thoughts bouncing in my head and the next thing I knew I couldn't stop.  Six months later, Faithful Deceptions was finished.  The rough draft anyway.  I've actually been working on the edits and revisions for this manuscript off and on since 2007.  After my first RWA conference in Dallas, I let it sit for awhile and finished the story I was working on to begin with.  Then switched to writing a middle grade book and Young Adult for a change of pace.  At least I thought that was why back then.  Now I'm thinking it had alot more to do with how the story and the human trafficking affected something deep inside me.  The research has always been a fun part of the writing for me.  Not so much with this story.  The things I read and learned were almost too much to bear.  And I had two young daughters at the time.  It really shook me up.

Maybe this subject is something I need to bring more out in the open.  Human Trafficking is not a crime that only happens in foreign countries like so many of us think.  I was one of those people.  Then I found out  how many cases actually take place right here in the United States.  The Walmart in my home town is actually a stopping point for those coming in from Mexico on their way into the U.S. with these young girls. Horrified isn't even strong enough a word for how this makes me feel.  I could sit back and thank the good Lord above that I have no real life experiences to draw on.  But I feel like there's more I should do to bring this out in the open.

This horrifying reality will be woven through my next several books.  And I think I'm the one most surprised by this sudden realization.  Funny how a story can grasp hold and not let go.  How it can dig so deep within you there's no escape, no alternative but to see it through.  Heavy sigh.  Another reason I love to write?  The possibilities, shocking truths and breathtaking journeys one's imagination can take you through.
Posted by Melissa at 5:22 PM

Not only is today my youngest brother's birthday, which makes it pretty darn special all on its own, but it's also a big step for me too.

Today you can find me visiting my good friend Autumn Jordon at: AJ's Notes.  Gosh, my very first interview.  So exciting. LOL  Please stop in and say hello.  I'm giving away a $10.00 Amazon gift certificate for one lucky commenter! Be sure to leave your name and email address when you comment so I'll know where to send your prize if you win. :)

Hope to see you there!


HAPPY BIRTHDAY LITTLE BROTHER! :)
Posted by Melissa at 3:41 AM