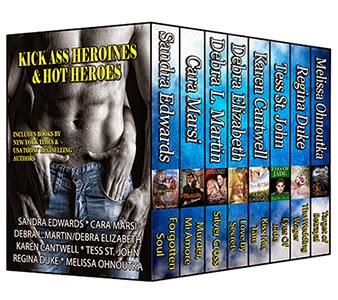 A con-artist, hired to locate a buried treasure, finds more than she bargains for in this enchanting tale.

Jewel thieves, murder and terrorists intrude on American Lexie Cortese's Roman holiday; can she trust the sexy, mysterious Dominic Brioni who comes to her aid?

Detective Lacy Gardner is the best at what she does – hunting down vampires that prey on the good citizens of Boston. Her skills will be sorely tested when a powerful new adversary comes to town, but her greatest threat will be losing her heart to one she may have to kill.

Love by Secrets -
From Debra Elizabeth
Age of Innocence, Book 1

Emily Stanton is falling for the dashing and handsome Connor Preston, but when her father objects and forces her to accept the proposal from Lady Tisbury's shy nephew instead, her heart is broken. How can she love her new husband when her heart belongs to the man who wrote her such beautiful love letters?

Tate Kilbourn was Bunny Bergen's long-forgotten, secret high school crush. But that was 24 years ago, and a lot has happened since. Devastated by a nasty divorce, trying to juggle kids, bills and her new job - not to mention a boatload of insecurities - the last thing Bunny needs is to fall for Tate again. But then she finds herself working with him, and gee, he sure did grow sexier with age...

After multiple attempts on her life, America’s sweetheart Eve Knight must put her faith in the FBI agents assigned to her case. After one agent’s special care of her, not only is her life at risk--so is her heart.

Kevin Wake hates being rich. He despises everything his father stands for, but he can't abandon his kid sister and baby brother. Their future is tied to his own. When his father threatens to rob them all of their mother's legacy, Kevin takes bold action to protect what should be theirs.

Megan Mully is out of the hospital at last. But she's homeless, jobless, broke and alone. Love is the last thing on her mind. Kevin is just a means to an end. She never expected him to steal her heart!

Kathleen Landon thought her life would finally get back to normal after the bizarre death of her husband. But a "chance" meeting with an old boyfriend throws her and her family on a dangerous and emotional journey full of secrets and betrayal.