"Betrayals of the Heart" Goes LIVE!

I'm thrilled to announce the release of "Betrayals of the Heart" available today at Amazon  and hopefully Barnes & Noble soon. The print version is due out later in November for those who like to hold a book with pages. :) I do hope you will enjoy this one. It's a litte more thriller, a little less romance. And I must tell you that the villain in this book kept me up at night. He's bad to the bone and had me wondering just where the heck he came from. LOL 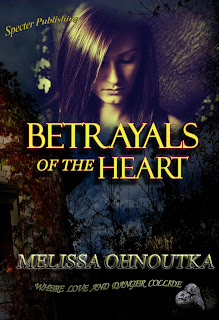 Makayla thought she'd fallen in love with the man of her dreams. But after the honeymoon, a horrifying reality sets in. She is a prisoner, a slave, a pawn for a malicious man's games. When her precious son is born, the need to escape intensifies. Little does she know that the man who helps her escape is working undercover with orders from the FBI to bring her in--a sure method to end not only her life, but her young son's as well.

Ryan Carter (AKA Robert Shaw from Target of Betrayal) knows way too much about lies
and betrayal. His entire life is now a lie. The minute he discovers his target is a victim and not the cruel criminal the FBI's profiler has made her out to be, his agenda changes. Against the wishes of the FBI, he disappears with their star witness, vowing to keep her and her young son safe from the satanic monster she calls her husband. What he doesn't plan on is falling in love--or having a son of his own.

Fate deals them a cruel hand in the form of a simple high school history project. The madman has found them and he's taken Ryan's son in exchange for Makayla. Can Ryan save them both? Or will history repeat itself and once again steal all he holds dear?
Show More
Show Less