ALERT! DNS Changer Malware - Is Your Computer at Risk? 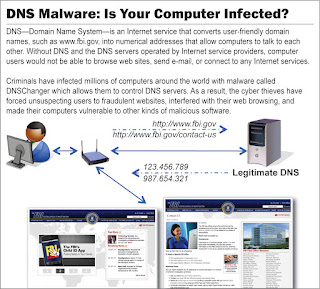 I heard some disturbing news a few weeks back about a computer threat and wanted to spread the word. This is another reason it is a "Must" to backup our computers. Even if we're careful, we just never know when a click on the wrong link will infect our computer with some type of virus, leaving us at the mercy of someone who understands this stuff. I learned the hard way a few years back. Had to have my laptop completely rebooted. Thankfully, I have an awesome computer repair guy, who just happens to be my baby brother. Now, I save everything. Everyday.

I'll start with the good news.  The FBI shut down an operation, called Rove Digital, last November and arrested six Estonian nationals behind it as well as shut down their malicious servers. The trojan virus, called DNS Changer, redirects your computer’s DNS queries from your ISP’s server to one created by the trojan’s creators — this essentially hijacks all Internet traffic from your comupter. The FBI set up its own DNS servers to ensure computers already infected wouldn’t be cut off from the Internet. Thank goodness.
But now the bad news. The FBI will be turning off their servers on July 9, 2012. If your computer is infected with this trojan it won't be able to access the web on or after July 9. With your Internet access cut off, installing anti-virus software to remove the virus will be a bit more difficult.

For more information about this and how to check your computer, click here:  FBI-International Cyber Ring
Posted by Melissa at 1:09 AM