Come Sail Away With Me! 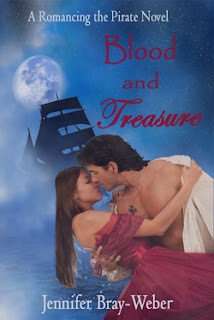 From Jennifer Bray-Weber's Website
Sail into a world of fearless pirates and spirited women, where clashing swords, superstition, and fickle seas are as plentiful as the rum. Danger lurks in every port. Betrayal is rampant. And there is always the Devil to pay.

Discover the pirate captains who seek fortune and the lasses who steer them into uncharted waters of the heart. Having lost all, these pirates honor a brotherhood creed to take all that they may, including the women who taunt them.

Hoist the sails. Adventure awaits those who chance Romancing The Pirate.

Lianna Whitney, who was gently bred but must now empty slop buckets and fight off randy seaman in a port tavern, unexpectedly comes into possession of a golden medallion. When the man who left it with her is immediately murdered by soldiers of the Royal Navy, she's afraid to admit she has it. Unsure who to trust, she's caught up in crossfire between a navy officer and a pirate captain, who, realizing she possesses the object he's been paid to find, whisks her away to his ship.


Captain Zane Fox is not interested in the mystical healing powers the medallion is said to hold, even though the legends claim it can bring a dying man back to life. He only plans to procure the medallion, drop the chit off at the next port where she'll be safe, and collect the money he was promised. However, as Zane and Lianna fend off the growing dangers of his occupation and attempt to outrun the Royal Navy, the two are also fighting the attraction they feel for one another. Lianna wants nothing to do with a pirate, opting instead for her new found independence, and he certainly has no use for another anchor - this one around his neck - regardless of how fetching she is. But when they are captured, Zane must choose between recovering the medallion or saving Lianna from the noose. And soon, it becomes clear to him that the medallion is not the only treasure worth risking his life for.

**I don't read many Historical Romance's much less ones with Pirates running about. But I really enjoyed this book and am looking forward to the next one in the series Jennifer has planned. You'll love and root for her characters and think about them long after reading that last page!

Get your copy today!